This review contains minor spoilers to the plot and the production. 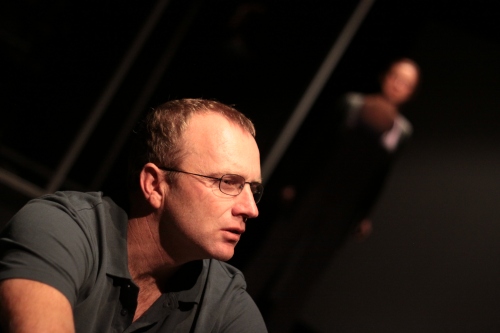 When Christopher (Chris Pitman) went to work today, his swipe card wouldn’t swipe. No matter what he did, the door wouldn’t register him. The cleaners didn’t even recognise him. As Clair (Lizzy Falkland) waited for the train today, a man came up, worried he hadn’t had a chance to say good-bye to his daughter. Recapping their days, overlaps and intersections of the mundane and the important, husband and wife talk past each other more than they talk to each other.

Slowly, their lives dislocate: Christopher finds himself unemployed – was the failed swipe card a sign?; Clair finds herself drawn to the man from the train station, Mohamed; their lives are interrupted by strange tales and accusations from their neighbour, Jenny (Anna Steen).

Martin Crimp’s The City, here presented by nowyesnow and directed by Geordie Brookman is a tight and tense look at lives that, while, perhaps aren’t faltering, are wrecked with tautness and strain. Crimp’s text, tightly woven and obsessed with structure, holds its audience at arms length: there is a mystery to the work, but it takes much labour to find your way into his mind and the mind of his characters.

Despite all my preparation for seeing The City, I wasn’t on top of the piece until the final scene in this production. In Crimp’s world, eerie and out-of-balance, nothing can be assumed to be the truth. As soon as you come to this realisation, as soon as you start noticing the cracks in this world, everything that is said is questioned. Things that once seemed true become lies, things that seemed lies become true, and even as the play ends I couldn’t tell where the frame of the “real” world within Crimp’s work began, and an imaginary world ended. Was any of it intended to be true? Was the whole thing fallacy after fallacy, lie wrapped up in a lie?

Crimp asks his audience to endlessly pursue some sense of truth in the work, and for much of the work this pursuit is somewhat frustrating. Holding you at distance, Crimp’s knowledge of this world is much greater than the knowledge anyone else can have.  The interesting thing about the balance of power through the work is not only do you not quite know what is happening, you are acutely aware of this sense that you do not know. That you are in fact always – and, you suspect, will always be – several steps behind the work itself becomes somewhat irksome, as your brain works to both stay involved with the script, racing to keep up as much as you can, but also to straggle behind to sort out the clues in the scene before.

As I reached the last scene, though, and Crimp gives the information to catch up, I felt like I had stumbled over the final hill and was finally sitting on top of the work. This balance of tension: from travelling behind, to all of a sudden being able to properly look back and see how you got to where you ended up is rather incredible.  While much of the work left me removed, there was an exhilaration behind this catch up and discovery of how all of these elements came together.

Although, in this, it means the greatest skills exhibited by Crimp here is one of form and structure, and there is perhaps too little in the characters.  In the end, if the characters are, in fact, not “real”, who are we to care about them?  To care about structure, form, craft: certainly. And these are all elements that Crimp’s characters themselves are interested in, a formalness, perhaps at the sake of an aliveness.

For much of the work, I wondered: in making The City so much a puzzle, has Crimp created an abstract maze which is so much about stretching our minds that it is too little about stretching our hearts?  But in clearing the final intellectual trade-off, there is a clarity offered through the puzzle that perhaps could never be offered through innately connecting to characters.

This isn’t to say Crimp’s end is clear. Far from it it.  We all came out of the theatre drawing different lines between the “imaginary” and the “reality” which exist in The City. Where Crimp (or indeed Brookman or any of the cast and creatives on this production) draws that line will no doubt be different from where I and you and everyone else involved in seeing the work will place it.

The City is not a play to relax into. Brookman has taken the tensions in Crimp’s text and held them tight through the whole work.  Even in the humour – and Brookman has brought out many laughs in the text – happen with unease.  The point between laughing with Crimp’s characters and laughing at them is messy and undefined – and to say if one would be better than the other is also impossible.

Pitman carries the work, his Christopher going through distinct character shifts through the work: Christopher the business man, Christopher the stay at home husband, Christopher the butcher are all one step removed from each other. Falkland, however, falters some in the small space of the Bakehouse. Clair exhibiting perhaps too much veneer as Falkland works pushes lines a bit too hard.

Jenny is the oddest character in the play: she introduces us to Crimp’s most bizarre concepts, and is the most removed from the central world of the city, yet Steen’s performance is the most grounded.  Certainly the most interesting casting is Matilda Bailey as the girl. Bailey is strong in her portrayal of  the young girl, but of course there is no mistaking she is a young woman. In any other play, perhaps, this casting would seem incompatible. Here, though, Brookman just brings another level to the mystery and lies.

Much of the work is done without intimacy, characters never having true connections, and then this is punctuated in small and surprising ways, particularly poignant was the the way we suddenly found Clair and Jenny so ensconced with each other they are touching foreheads. Brookman brings this moment upon us with such quietness we almost don’t notice it is happening until it is done, and in the small space of the Bakehouse these moments of connection between characters easily reach out unto the audience.

Lamb’s staging is hard and colourless: the grey carpeted floors, white walls and ceiling, the shiny back wall that seems to float in the air, all aid to Crimp’s removal and oddness about the piece, reflecting the harsh glass surfaces Jenny speaks about in her piano playing. Here, we’re not quite in a house, but we’re not quite removed from a house, either.

Then as the world starts to collapse more, as the shining artifice which the couple have built around themselves begins to wane, revealed to us is an old upright piano, earthy brown wood in sharp contrast. It stands upstage, broken and wearied after years of neglect, half desiccated, with half shattered cinderblocks blocks leaning on its sides. The broken parts of the world tried to be kept hidden are hidden no longer.

Lights in Lamb’s ceiling appear to be innocuous, a simple component of the set, but they too reveal themselves to act in shifting and altering the mood of the piece, creating pockets of bright focused light as the rest of the stage is in darkness or half-light. In the opening scene, Flett’s lighting seems hesitant, awkward in a way which it wasn’t through the rest of the production, to the point where I’m tempted to put these strange fluctuations down to opening night. Through the rest of the piece, Flett’s lighting helps to encase the show, revealing and releasing throughout the moments of tension.

Precise sound design is something we see (or, rather, hear) far too little of in Adelaide. Howard’s work often so softly underscores the action that you don’t entirely notice it until it, like Crimp, is there on top of you. And it is sign that Howard’s work is so skilled, and so localised throughout the space, that every noise in the theatre becomes questioned: is it deliberate, is that part of the work, too?

In the final moments of the work, as you finally feel like you are standing on top of Crimp’s work, the set, sound, and lights come to a unison crescendo and once again, the work is on top of you.

The City is not easy watching, and it asks a lot. But it is in that pursuit, of standing and looking back on the journey which was travelled that the strengths of Crimp’s structure are found.