I am back in Adelaide after my whirl-wind trip to Sydney. I saw a few shows (a couple of reviews pending), caught up with some wonderful friends (including two favourite fellow arts writers), and spent over fifty-hours surrounded by cake and feminist performance art.

Over the four days, I asked who gets to call themselves a feminist? and does it matter if young women aren’t feminists?; I thought about the difference between a “cook” and a “chef” (and an “artist”); I interviewed a young show baker and the VP of the young, feminist, CWA, the Perth Belles; and I thought about the state of internet bullying. I summarised the room with 57 Hours, 46 Minutes, 38 Seconds to go; 42 hours, 51 minutes, 40 seconds to go; at the end; and out the other side.

I read-up on my favourite CWA cookbook rules; gave two notes on egg anatomy; linked to My Drunk Kitchen, and instructions for the perfect icing colouring. I documented what I didn’t feel like doing on my worst morning, and pushed through to write the piece I’m proudest of through the whole process.

If you have the time, please check out the whole website. There are hundreds of photos, many more essays from Ianto Ware, and quite the collection of baking-related youtube videos. You can also watch the final cake judging – an incredibly bizarre and regimented set of rule-based judging for a theatre critic to witness.

Thanks to those who followed along the way – we were absolutely blown away by the scale of online engagement. And massive thanks to Brown Council for having me – you can feed me cake and ask me to write about feminism anytime.

This week, I’m off to sunny (please be sunny) Sydney to be a writer in residence with Brown Council‘s Mass Action.

As a part of Performance Space’s Halls for Hire, Brown Council –  Kelly Dolly, Kate Blackmore, Diana Smith, and Fran Barrett – will be spending ninety hours at the CWA in Potts Point baking all 137 recipes in Jam Drops and Marble Cakes. Ianto Ware and I will be the writers in residence, writing about all things feminism, cake, and art.

If you’re in Sydney, you can drop in and see the work Tues 12pm – 3pm, and Wed – Fri 10am – 3pm. There will also be an afternoon tea on the Saturday which is now booked out, but Performance Space has details about the wait list.

This article was original published in the January 2012 Issue of the Adelaide Review. 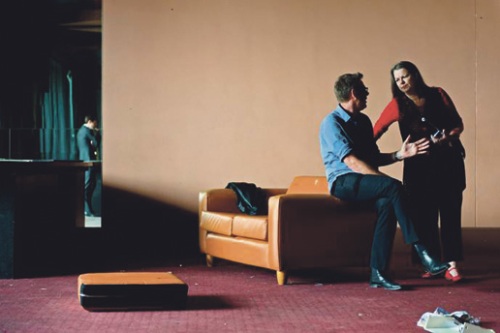 This festival season a new cultural venue will open on the southern side of North Terrace, the latest incarnation of the Tuxedo Cat. Since 2008, the Tuxedo Cat has established a reputation as one of the most loved Fringe hubs for independent performing
arts work.

Established and run by Bryan Lynagh and Cassandra Tombs, the Cat, as they affectionately call it, started as a rooftop venue in Synagogue Place off Rundle Street, running for three Fringes before the building underwent development. For the 2011 Fringe they opened in Electra House opposite Town Hall, also sitting empty in preparation of development. In 2012, they will be operating in Club 199 and the iconic 200 North Terrace.

“We feel like it’s our best address yet,” says Lynagh over a drink. “I think it’s a good mix having the Art Gallery and Library and Museum just across the road from a grassroots arts venue.”