Australian Theatre Forum: And that’s all there is 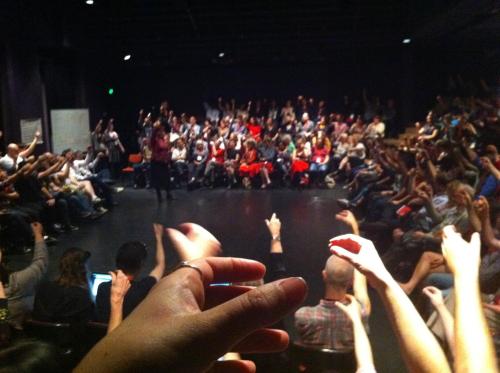 A toast to the future. (Notice the obnoxious glare of blogger's computers in the front row.) Photo thanks to Olivia Allen.

4:12 PM and we’re sitting collected in the Visy theatre at the Brisbane Powerhouse, and I think I can speak for everyone – if not at least for super bloggers Augusta Supple and myself, who collectively have typed somewhere in the air of one million words in the past three days – when I say we are exhausted.  It has been a huge three days.  Mine weren’t helped by the lovely hobbling and limping I’ve been having fun with, thanks to the sprained ankle I received after hitting the Brisbane galleries a bit too hard.  Yeah, I’m hardcore.

But more so than that, it was an intense three days of ideas and processes: panels, talks, open spaces, wine, beer, shows and picnics have all played a part in where we are now at the end of 2011’s Australian Theatre Forum.

Wesley Enoch is talking through the top points which came from the open spaces, through to action meetings, before being presented and voted for by the group.  Ten votes each with red dots, he is talking us through the strategies, the ideas and the plans which we are going to move on to and act upon outside of the forum.  “These things will go forward as a way of promoting the things we do as a united voice”, says Wesley.  On to policy makers, on to the Australia Council, on to government, on to the sector, and on to Australia as a whole.

Each of the three days has ended with daily impressions.  The incomparable Candy Bowers comes up to do her daily impressions.  I have a slight existential crisis when asked to hold hands with the people next to me and I have to stop typing.  I’ve been attached to this machine for too long.  But the battery is almost dead, so I don’t know how much longer I can do this anyway.  And it’s okay, because what Candy does for us is beautiful.  Like she is.  Such an amazing ball of energy, and light, and fiery passion.

More daily impressions, Humphrey Bower talks of “How we all come together at the same table.  What a gift that is to all be able to do that, and hopefully be able to invite audiences to that table as well.”

Tim Stitz encourages us to cook, in different ways, with different people, with young people, with people who might not know the food we eat. “Delicious, instant, live, sweet, sour, salty, spicy.”

“We all do things differently, and our family might have taught us to cook a different way, but there’s the rub.”

Anni Davey thanks the respondents, and a large cheer goes up in the room.  She praises their ability for working in the round. She asks for people to stand up and say what ever they want to the room.

It’s 4:35 and someone has turned up the air-conditioning and I am cold in my summer frock. Someone mentions sport, I was quite happy that we were going to go three days without the mention of arts v sport. But it goes by fast, so I’m okay.

I’m struck by how few people I got to connect with these three days.  I was introduced to more people than I can possibly remember or count, but I still see so many faces I can’t place.  Maybe in 2021, that magical ten year plan we’ve be looking at, I will know everyone who is in the room.

Maybe I won’t be in the arts at all.

I’m thinking of being an astronaut.  I’m pretty sure that comes with less stress.

Huge cheers and stamping feet for ATF curator Fiona Winning.  She thanks everyone who meant so much to the forum.  I want to write them all down, but I get lost in the swell of names.  I just want to thank them – you – all, too.

I wonder if I will post this stream of consciousness. I think I will, and will be okay if some of it doesn’t quite make sense.

We are about to go have a drink up stairs.  But first we’re asked to raise our imagined champagne glasses for a toast for the next few years: agency, risk embracing, sharing knowledge, connections, and convictions.

4:50 and the hubbub rises through the room as people start to leave.

Thanks for being on this crazy blogging journey with me.

4 Comments to “Australian Theatre Forum: And that’s all there is”