The king has abandoned his kingdom, the knights have taken over, and tyranny rules the land.  Robin returns after a two-year absence, and quickly falls back in with his friends: Marion and Wil.  When Robin fails to save the life of a young boy, he and his band, joined by Little John, move into the woods and steal from the rich to give to the poor.  This is Robin Hood like you know it, and yet nothing like it. 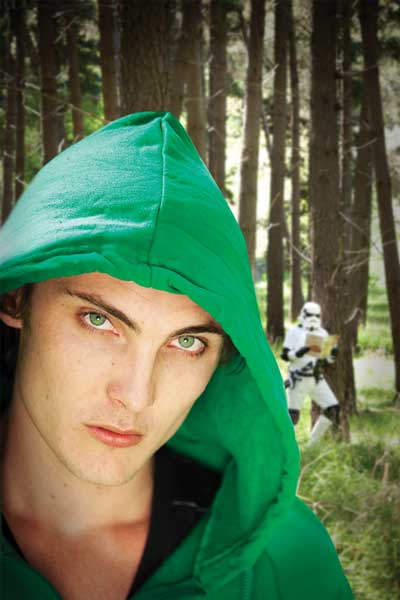 With carpeted lounge, two walls with forest photographic wallpaper, some doors, chairs, and logs, in Fugitive Jonathon Oxlade has created a delightfully simple set: the changes in locations (along with many props) exist only in our imaginations, yet we are never left with any doubt as to where they are.   Exceptional lighting by Richard Vabre, and composition and sound design by Luke Smiles help to compete the puzzle, and are both as integral to the narrative as the dialogue.  It is a true testament to this production and team that these three arms of design never seem like distinct entities: they are constantly working in such an incredible balance it seems as though they were created by the one mind.  Coming together with these elements, the story and production doesn’t need to spell things out, because through this creativity a world much bigger than could ever be realised on stage is created.